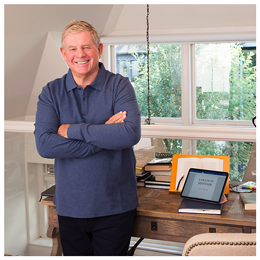 Mark Ellis is a thriller writer from Swansea and a former barrister and entrepreneur.

He is the creator of DCI Frank Merlin, an Anglo-Spanish police detective operating in World War 2 London. His books treat the reader to a vivid portrait of London during the war skilfully blended with gripping plots, political intrigue and a charismatic protagonist.

Mark grew up under the shadow of his parents’ experience of the Second World War. His father served in the wartime navy and died a young man. His mother told him stories of watching the heavy bombardment of Swansea from the safe vantage point of a hill in Llanelli, and of attending tea dances in wartime London under the bombs and doodlebugs.

In consequence Mark has always been fascinated by WW2 and in particular the Home Front and the fact that while the nation was engaged in a heroic endeavour, crime flourished. Murder, robbery, theft and rape were rife and the Blitz provided scope for widespread looting.

This was an intriguing, harsh and cruel world. This is the world of DCI Frank Merlin.

He is published by Headline Accent, an imprint of Headline.

He is a member of Crime Cymru, the Welsh crime writing collective, and of the Crime Writers Association (CWA).

His third book, Merlin at War, was on the CWA Historical Dagger Longlist in 2018.

The new Frank Merlin book, A Death In Mayfair, came out in November 2019.

The publication order of Mark Ellis’ books can be found here, Booksradar.com.

Mark Ellis on ‘Being Mark Ellis, the writer’